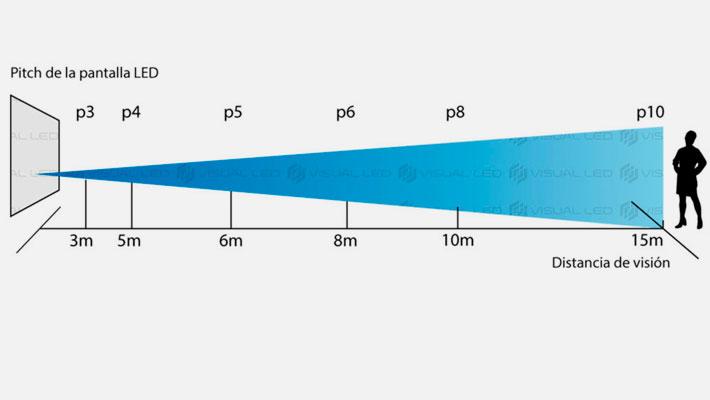 WHAT IS THE VIEWING DISTANCE ON A LED SCREEN?

The viewing distance on a led screen is defined as the correct distance so that our eyes generate a clear and defined vision of what is being reproduced.

WHY DO WE TALK ABOUT VISION DISTANCES ON GIANT LED SCREENS?

A LED screen is formed by points of light, these points can be separated by several millimetres, which is what we call pixel pitch. The technology of LED screens allows us to choose between different pixel pitches, which is why the viewing distance has been taken as a reference to choose the correct pixel pitch for the screen we want to purchase.

Viewing distance does not exclusively define the pixel pitch we need, since it also has to go in accordance with the total size of the screen. The smaller the screen’s pixel pitch, the more LEDs we have to add per square meter to have a good resolution. On the contrary, with larger screens we can use larger pixel pitches.

RELATIONSHIP BETWEEN DISTANCE OF VISION AND SCREEN SIZE

To establish this distance, it is essential to consider the space where the screen will be put up, while taking 2 main characteristics into account:

It is not necessary an exact size but an approximate value of the screen we want. It is important to remember that in advertising LED screens, a larger screen impacts more than a small screen according to studies. All this, regardless of the resolution or pixel pitch used.

Who do we want to guide to the led screen display?
For example, a LED screen in a shop window,, located on the first line of a large roundabout with a lot of vehicle traffic, but with a small area for pedestrians. This would indicate that the screen has to have a viewing distance of 6 to 8 meters, since the visualization by the occupants of the cars is the most important.

Once we have this information, we can know the correct pixel pitch based on the following scheme: