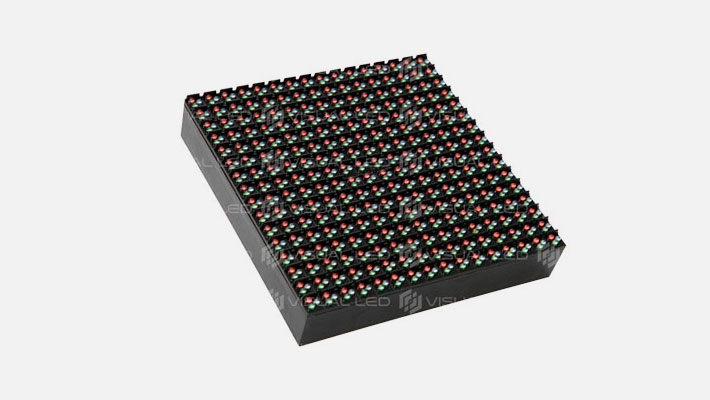 A LED panel or LED module for LED screens, is a small circuit that integrates the LEDs and the rest of the necessary electronics so that the LEDs can reproduce images and videos.

The sizes of the LED modules or LED boards are generally defined by the pixelization of the modules.
For example, the most popular sizes according to pixel pitch are the following:

CONNECTION AND WIRING FOR LED PANELS/MODULES

Modules only have two connections, on the one hand, we have a 5V AC power supply and on the other, the multipin data input.
Each power supply feeds a group of LED modules and in the data part, these are sent to the modules from the controller card or Receiving Card.

FIXING AND INSTALLING LED MODULES IN THE CABINET

Small LED modules can be installed in the structural frames or cabinets that make up the giant LED screen in several possible ways. Everything depends on the usage and installation of the screen.

The modules are attached to the cabinet structure by screws. This is the most standard and usual way on LED displays.

For quick substitutions where maintenance has to be done in a few seconds. For this function, the screws are replaced by magnets.

In this case, the modules slightly larger than the standardized ones and integrate frontal drive systems in order to be removed from the frame or cabinet. These modules are only assembled on large LED screens installed on facades or building walls.

PARTS AND COMPONENTS OF AN LED MODULE

Electronic board:
Circuit with copper conductor tracks that interconnect its components. These plaques are assembled with fully automated integration processes. In the case of applications for LED screens that are resistant to rain, insulation and anti-humidity treatments are carried out to add an additional layer of protection. On the front, LEDs are inserted and, on the back, the ICs (chips or integrated circuits) are assembled, which manage the colour, brightness and all the aspects that allow the reproduction of images, as well as the data and power ports of the circuit.

Frontal mask:
It is a black plastic front piece. It has holes that match the position of the LEDS. Generally, it is assembled on the surface of the module with small screws.
The functions of this grid or mask in the LED modules are several:

Rear plastic structure:
Part of black plastic that gives rigidity to the printed circuit and allows its fixation on the chassis of the Cabinet LED. Rain resistant LED screens usually incorporate rubber gaskets to prevent water or moisture from entering the interior of the LED display.