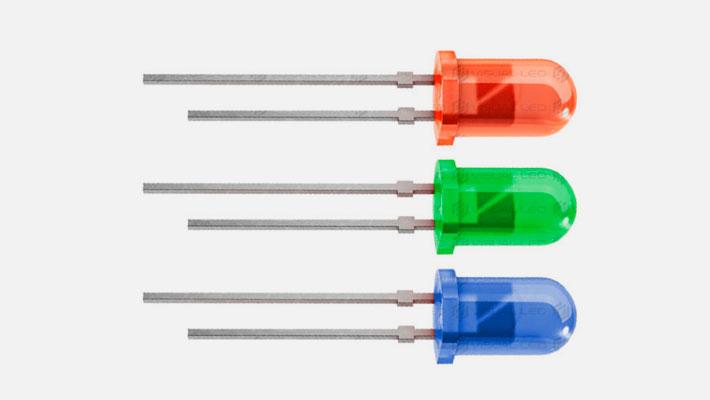 LEDs with DIP encapsulation -dual in-line package- have been the preferred option in led advertising screens until very recently. Their high resistance to outdoor environments and their great luminosity has made them the perfect ally.
Currently, this type of LED is only used for very specific projects that require a high degree of resistance against impact. Due to its lower production compared to other LED technologies, it tends to be a more expensive option. However, its performance and outstanding durability continue to make it a competitive option in the market

DIP LEDs have a cylindrical shape with a sphere on top, which improves the light´s projection. The interior contains a single cell with the semiconductor crystal that emanates light with a continuous flow of electricity.

By having a single-color cell, DIP LEDs can only produce a single color. That´s why DIP led screens are combined in a 3 DIP pixel, each capable of emitting a particular colour (Red, green and blue).

One of the best features of DIP LEDs are their resistance to impacts and blows, this is due, in part, to the resin encapsulation that abundantly covers all the exterior. Also, the LED is integrated on the modules or led plates by welding it directly to the circuit board by two pins, this type of union is more resistant than other systems, such as SMD LEDs.One of the best features presented by the DIP is its degree of resistance to impacts and blows,, this is due to its resin encapsulation that covers all its exterior abundantly. In addition to other features that gives it great durability is its integration system on modules or led plates, since they are created with two pins that are welded directly on the circuit. This form of union on the module’s plates is the most resistant, greatly exceeding the system used in SMD LEDs.

Currently, DIP leds are used in situations where durability and strength, as well as brightness intensity, are key factors. For years, they have been the most used type of LED in all types of applications. This situation is changing recently, due to the rise of the more advanced SMD LEDs.
In addition, the market for LED screens keeps demanding higher screen resolutions, which can only be achieved through the use of SMD leds with smaller pixels. However, DIP technology LED screens are still a great product, suited for screens that will be viewed at great distances, thanks to their brightness with a high durability and resistance.

TYPES OF SCREENS WITH LED DIP

Visual Led offers several types of LED screens that can use DIP LEDs. We classify them in the following categories: