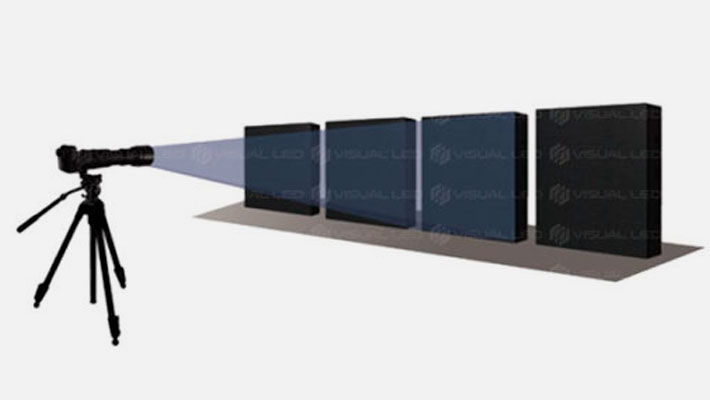 CALIBRATION OF A LED SCREEN

The calibration of a LED lights is a process that ensures the consistency of color and brightness in all LED modules or plates on a screen. This assures the a uniform high quality image; an important necessity in screens used for advertising.

The process of achieving uniformity of different led modules is known as relative calibration, or screen uniformity.

Once the screens are manufactured, good screen manufacturers submit all their screens to calibration processes before being delivered.

In professional applications, such as LED screens on television dishes, both the uniformity of the image and the quality and realism of the color is of great importance; we achieve both with a process known as absolute calibration. This is a costly process for manufactures, so it is only recommended for high-end televisions or professional broadcast systems.

HOW TO CALIBRATE A LED MONITOR

The calibration process is performed with special cameras, also known as colorimeters. These devices capture and measure a greater spectrum of light than conventional cameras. The colorimeters record pre-established image patterns that are analyzed by a computer system in real time. Once the diagnostics are done , the individual componentes of the LED monitor are modified to fix any issues. This camera system works in conjunction with a software that interprets the data and must be compatible with the LED screen’s internal data card. With this process the brightness and color can be corrected on the hardware itself.

SHOULD AN OLD LED SCREEN BE RECALIBRATED?

With the passage of time (years) and the increase of temperatures, the LED ‘s spectral peaks are reduced, extended; altering the wavelengths. These alterations cause changes in chromaticity.

Therefore, the result of LED aging are lower brightness, a shift of the white balance, and the altered chromaticity of the primary colors and the other intermediate colors.

Carrying out a calibration once the screen is several years old, is based ion a general brightness reduction. That is why the best advice is to acquire screens with high quality LEDs, since these effects will be less noticeable over the years and, to some extent, you may avoid this type of issue.