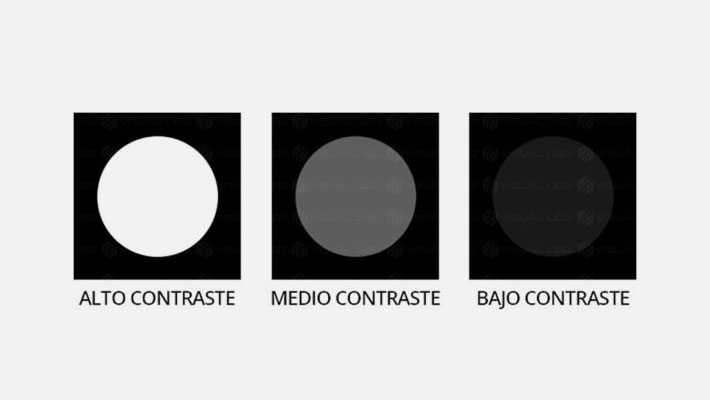 The higher the system’s ratio the more the ability to produce intermediate tones, thus offering a better dynamic range and a greater capacity for color reproduction.

WHAT IS THE DIFFERENCE BETWEEN REAL CONTRAST AND DYNAMIC CONTRAST?

Real contrast measures the difference between a black and a white pixel in an instant, and its usually a low number (800: 1, 1000: 1, 1600: 1, …). This is the number to pay attention to if you are going to use your screen for static images such as graphic design or photo editing.

On the other hand, the dynamic contrast is a convenient measure used by manufacturers and it measures the variation of a pixel from black to white (or between greys) in a period of time. This figure does not depend on hardware, as is the case with real contrast, but on software algorithms and image treatments. The figure is usually much higher than the real contrast (for example 20000: 1, 50000: 1, 100,000: 1 or even higher). The dynamic contrast ratio is a relative measure, but it can be useful to predict how good the contrast can look in moving images.

BLACK LED CONTRAST IN LED SCREENS, IS IT BETTER?

Indoor LED screens have been designed with SMD LEDs that are commercially called Black LED (there are other trade names), where the coating resin has been tinted in a black or a dark tone. Due to this, the contrast of darker images is increased. However, the contrast of white colors is negatively affected,  so it tends to even out, making black LEDs more of a marketing tool than an important value to consider.OBSOLETO - Eliminar SHORTCODE